Intel’s Arc Alchemist graphics cards still have no release date for us, but the first wave of GPUs released has already begun in China. First we had the laptop GPUs come out which weren't too great, and now we have the first desktop card. Unfortunately, like the mobile cards, the Intel GPU is not too impressive… 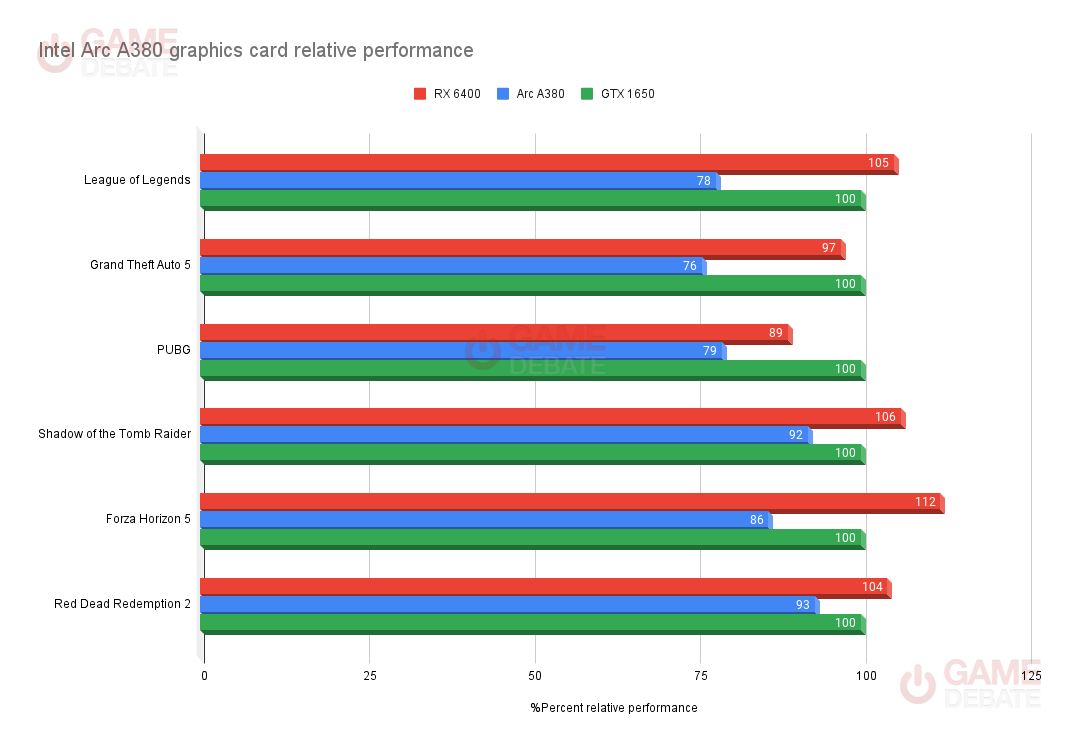 So Intel’s very recent entry-level card is performing slower than Nvidia’s entry-level GPU from 3 years ago. It’s not exactly terrible performance, but when compared to a 3 year old card it doesn’t look too impressive for Intel. Once again these performance could be due to early drivers.

What’s even more strange is that the Arc A380 actually performs really well in synthetic 3DMark benchmarks, where it manages to outperform the GTX 1650 and RX 6400 in the Port Royal test, come in between those two in Firestrike, and blows past them in Timespy where it actually gets closer to an RTX 3050 than the GTX 1650.

Early drivers would explain the problem here, and also explains why Intel would have launched their first entry-level GPU on its own and in China alone. If Intel had released their flagship GPU and underperformed like the A380 has right out of the gate, then that would not have looked good for the Blue Team. Hopefully future drivers will bring that performance back up, and finally mark a release date for their higher-end cards in the west.

What do you think? Are you excited for Intel Arc Alchemist? How do you feel about the performance benchmarks for the Arc A380 above? Do you think the poorer performance is due to the actual hardware or because of early driver support? Let us know your thoughts!

What do you think of the Arc A380 performance?

What do you think is the primary reason for the underwhelming performance?

Is this new Intel GPU even oriented to gaming? I think it is not and that it's performance is okay for its price.

Quoting the title from an earlier article:

It better be comparable to a quadro card and be useful for CAD design, otherwise it's a waste of money and resources.

Anyone else expect otherwise? I bet the price will be higher as well

It is bit weird talking about this without knowing price, since in the end, what makes card good is price to performance. If it performs 30% slower and costs 30% less, is it really bad card or is it just cheaper segment? Though by all means, Intel has plenty of room to royally screw this up and price way too high and likely will, I will judge when I know details. And I am pretty sure drivers and perhaps even lack of optimization on game side really wrecks it. I don't think hardware is that bad. But in world where you literally have nVidia sending their people around, telling developers how to optimize stuff and even offering to literally just program whatever for them, just to max out on optimization, I do see Intel getting royally screwed, since they can only rely on their own drivers. Plus drivers were reason why we didn't get Arc one year ago. Since benchmarks do show that power is there, but games aren't all about raw power, but rather about fine tuning and this is where AMD and nVidia are lightyears ahead.

Oh brother, these things are DOA

What's important is that they finally released a desktop dedicated GPU. Things should only get better from here, but the problem is that they are also using TSMC, doesn't help with the shortages.