Intel’s upcoming Arc Alchemist launch hasn’t been going super well in terms of performance rumors and the fact that no solid release date has been revealed yet. But lately the Blue Team has been giving insights into performance expectations of one of their mid-range cards of the series, and the latest results paint an impressive picture.

According to Intel, the Arc A750 GPU achieves an impressive 60fps on average in Control on High graphics settings at 1440p. That’s without ray tracing though, but no upscaling, which compared to Nvidia’s RTX 3060 puts the Intel card slightly above at roughly 15% faster. Check it out in action below:

Intel says that the Arc A750 beats out an RTX 3060 in a lot of AAA games, including Cyberpunk 2077 (15% faster), F1 2021 (17% faster), Borderlands 3 (13% faster), and Fortnite (6% faster). But what’s more interesting is that Intel says the GPU will offer a great price to performance, which coming in this late to the GPU market will probably be the deciding factor for a lot of people. 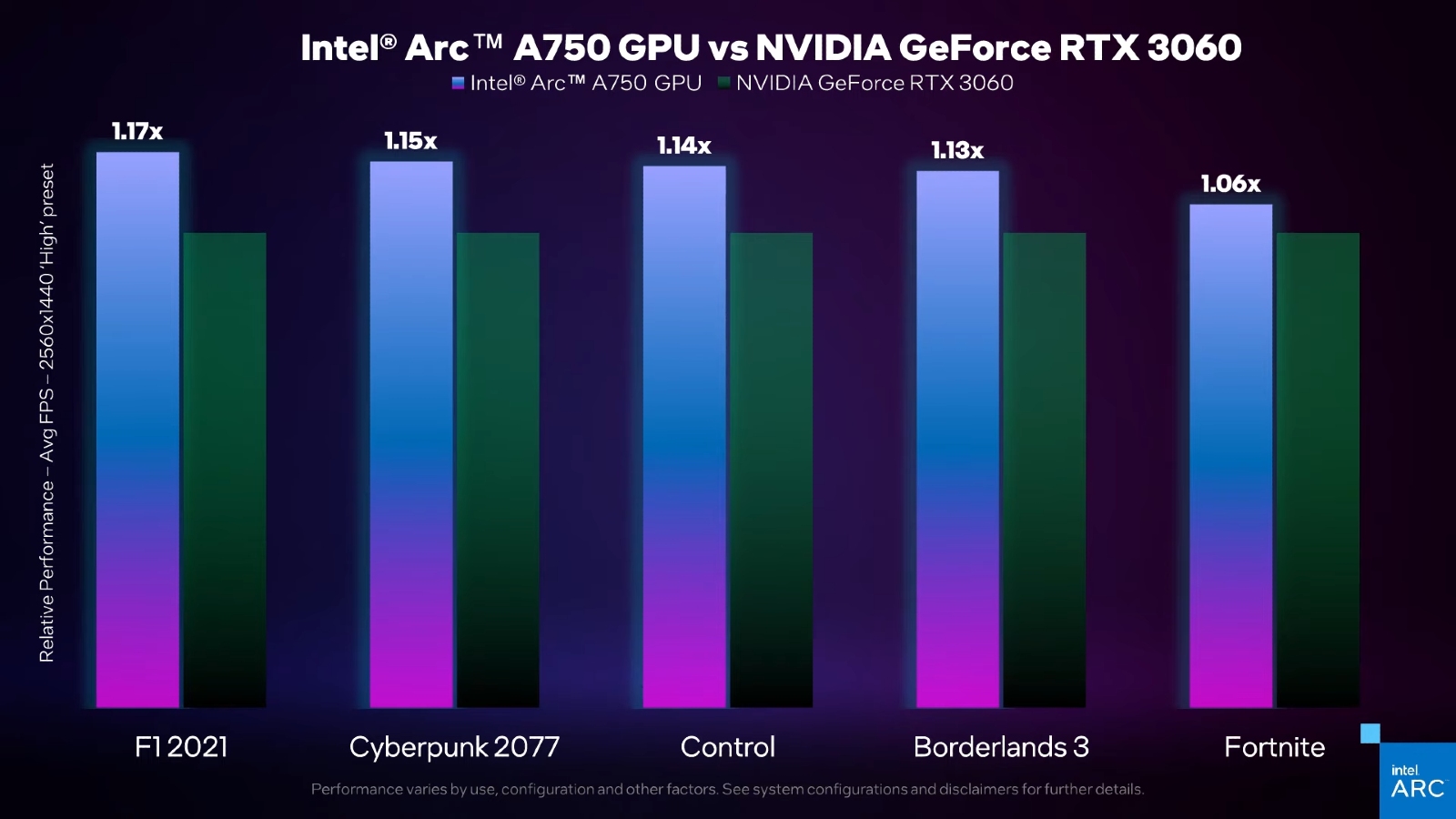 The RTX 3060 cost $329 at launch, which means Intel will have to price it lower in order to stay competitive considering the RTX 40 series and RX 7000 series are just around the corner. Based on the video above it sounds like Intel will be rolling out more videos on performance for their Arc Alchemist graphics cards.

What do you think? Are you excited for the Intel Arc Alchemist graphics cards? How do you feel about the performance benchmark above? And how expensive do you think the card will be now? Let us know your thoughts!

How do you feel about the Arc A750 GPU performance in Control?

How much do you think this GPU will be priced now? - In USD

Definitely very interested in seeing what this will look like in terms of Linux, if it goes for a decent MSRP i could see this easily rivaling AMD in terms of the Linux GPU market. Presuming of course that the driver's don't suck.

So weird to see Tom Petersen not under an Nvidia badge :D

I don't think most would beta test Intel dgpu drivers for them. Check out gamers nexus vid on how busted those drivers are - https://www.youtube.com/watch?v=MjYSeT-T5uk

If they price it under 300~ and really fix this driver mess it COULD be a compelling buy.

Then again how well supported can old games possibly be? How important are old games to gamers? Personally, as long as a recent AAA games and esport titles run well, legacy media is kind of... a nice bonus. Nothing deal breaking if I can't play Doom 3.

So its comparable to a 5700xt. Intel made a 3 year old GPU as their flagship model.

As a start that's not bad. But the drivers are a complete mess. And older games are a hit or miss.

If they don't just give up on this, then maybe in 5 years we'd finally have a new decent competitor.

In the current state I wouldn't buy an Intel GPU.

This mentality is why we are where we are today in terms of duopolies.

The RX 5700xt was NOT a flagship GPU. Also this is their mid-range GPU.