Bring it Back - No One Lives Forever Edition

Welcome to a new column here at Game Debate. It’s a little corner of my brain I’m calling “Bring it Back!”

From time to time, I will make a clarion call to the video game universe with one simple goal:  resurrect a once loved game or game franchise that has since slipped into the crevice of obscurity...

I’m hoping some of the other writers will contribute a Bring it Back! article of their own from time to time. I would also love to hear from all you readers out there in Readerville: what dusty, now obscure game would you love to see given new life? I’d also like to hear what you think of the column, and if you would like to see more… as Dr. Frasier Crane would say, “I’m listening…” 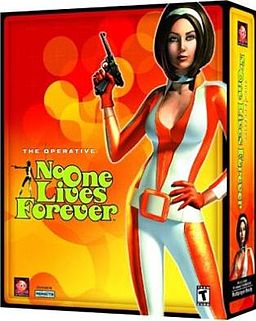 Our first contestant here on Bring it Back! is the spy spoof first-person shooter series, No One Lives Forever. NOLF, first released in 2000, was developed by Monolith Productions, who went on to great success with the first and second F.E.A.R. games (2005 and 2009), the endlessly brilliant TRON 2.0 (2003), both entries in the Condemned series (2005 and 2008), and are currently hard at work on Gotham City Imposters and Guardians of Middle-earth (both released last year). The first NOLF (properly titled, The Operative: No One Lives Forever) was followed up in 2002 with a sequel, No One Lives Forever 2: A Spy in HARM’s Way, and a spin-off sequel in 2003 called Contract J.A.C.K.

Imagine a FPS version of the Austin Powers movies, and you have the basic gist of the NOLF series. NOLF takes place during the 1960s, and spoofs all of the kitschy, colorful spy movies of era. You play as UNITY agent Cate Archer as she travels the globe battling the evil HARM organization. Everything you might expect to be included is there: outrageous self-referential characters, an endless supply of dopey henchmen, hilarious spy gadgets (lipstick grenade, anyone?), and some of the funniest dialog this side of Borderlands 2. To wit, the following is a conversation Cate overhears between a HARM henchman and a Moroccan street merchant:

The NOLF games are boisterous, exciting, immersive, and most of all, as fun (and funny) as the best video gaming experiences out there. With the recent success of Borderlands 2, I think the time is right for another colorful shooter with healthy dollops of parody and farce.

Unfortunately, from the brief Google research I’ve done I found the ownership rights to the NOLF franchise are currently trapped in the slippery blackness of limbo. The games’ publisher, Sierra Entertainment, was sold to Activision in 2006. However, from what I gather, Fox Interactive also holds a great deal of control over the franchise, so it’s unclear where the publishing rights now stand.

What’s more, the franchise is the brainchild of Monolith. Unless the studio is at the helm of recreating the NOLF series for the 2010’s, it may be better left in the Gaming Hall of Fame that resides in my brain. Otherwise, something quite terrible might be unleashed that pisses all over my precious gaming memories (see: Soldier of Fortune: Payback). The brilliant dudes and dudettes at Monolith have a lot on their plate right now, so it would be anyone’s guess if they would be up for NOLF, round #4.

We burgeoning recruits of UNITY can certainly hope and pray they are.

Never heard of NOLF? Enjoy the trailers for the first two games…

I've been hoping for some kind of sequel or a reboot of BloodRayne the video games but nothing. Also the sequel to Advent rising which i believe is from the same company as BloodRayne.

BloodRayne is another good one to add to my list to cover in this column. Thanks for the reminder! BR 1 & 2 were real guilty pleasures for me. There was a 2D BloodRayne that was released a year or two ago, but I think that hardly counts as a full-fledged sequel.

I can see you writing about the darksiders soon lol

It's too recent of a franchise. Next up I'm thinking of either the original Red Faction (from 2001), or the SWAT franchise.

Wolfenstein 0.o That game was amazing ;)

Well, write it up! I'm hope the other GD writers contribute as well.

Haha yeah I was aiming to ;). I'll have to prepare a bit though!

Unintended pun, but I probably shouldn't say that =D

Ensemble Games, which created AoE, went out of business. I'm not sure where AoE stands, publisher-wise.
DOOM 4 should be out either this year or (probably) next.

Excellent article, I'd love to see someone remake Fallout 2 ;)

I expected that from you lol

Besides the obvious change from isometric to first-person, what are the main differences between Fallout 2 and Fallout 3? I have only ever played FO3 and FO:NV.

Fallout 3 feels like a censored Fallout, it doesn't have the feeling and 'depression' the original games had :D

To me, "censored" means explicit material has been deleted. Is that what you mean, or am I missing your point?
.
One of my favorite parts of FO3 and NV is the big band jazz/pop songs from the 1930s-1950s. I love listening to Billie Holiday and Bing Crosby as I'm wandering the wastelands. Do the old FO games have similar soundtracks?

I think he means that the atmosphere of fallout 3 wasnt as present as it was at fallout 2, aka the feel wasnt as gripping.

FO2 must have had a very convincing atmosphere, because (for me, at least) the further away you get from your playable character, the less emotionally effective I find a game. I've played fun isometric games (Baldur's Gate Dark Alliance is one of my favorites), but the closer the camera comes to a first-person view, the more emotionally invested I find myself. It's probably just my own personal quirk!

Warmice hit the nail there ;)
This is the main theme for Fallout 2 and the rest of the soundtrack is very similar to the newer Fallouts :)

Okay, well I'll have to check it out!

Great article and idea ;). Got to give the golden oldies some credit.

Some of them were too good to simply let fall into obscurity.
Just keepin' it old school in the twenty-thirteen.

Yeah indeed, it also showcases where we've been coming from, and where we stand now ;).

This is a great idea.
Loving the column too.
My first thought was I haven't been alive long enough to have such memories of forgotten games.
But then I remembered Myst. And how I loved to play those series.