They say you can't keep a good man down, and it's true! OSUBoarder is still pushing through with his 365 days of gaming, and he's nearly at the 4 month mark!

Today we've got another Hi-Rez game, Global Agenda - check out what the verdict was in OSUBoarder's 365 Days Of Gaming...

A few days ago I played and reviewed the game Smite which is a Dota-like MoBA played in the third person. I thought that the game was well done and it added a level of immersion that I did not get in other games. Even longer ago I played another game by the same developer’s that was an innovative fps that has swept the free to play genre since its release. Tribes: Ascend was a futuristic first person shooter that I had a lot of fun with throughout the playing. After doing those games and really enjoying them I decided that I would go for the Hi-Rez hat trick and bring you their third big free to play game.

Global Agenda is a free to play third person shooter developed by Hi-Rez in 2010, however it would be 2011 until the game would go free to play. The game takes place in a slightly futuristic time where an evil corporation called the Commonwealth has risen to power with an army of robotic troops behind them. The human population has greatly decreased and there is little habitable land left on earth. Luckily there is a technology that allows little sections of land to be cleared for habitation. With this however is comes great fights and debates over who should get it, which becomes the premise of the game. 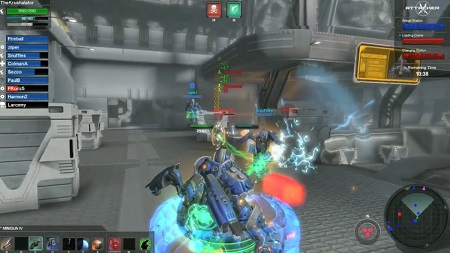 The game allows a large deal of options when first selecting and creating your player. There are 4 classes to choose from with a male and female variant in each class. The game then allows you to change in detail the physical features of your character. After playing through the introduction you are placed into the city which acts as a central hub. You can move and fly around (that’s right, jetpacks!) as well as buy stuff but you cannot use your weapons. From here you can embark on various mercenary or, PvP, PvE or challenge quests. Mercenary modes are like the standard shooter modes, such as capture the control point or protecting payloads. These games are played with two teams of 10 and are matched based on the player’s rankings. You can also go co-op with another person for Special Ops missions. There are four different versions of increasing difficulty but each one gives you 20 minutes to make it to the final boss and then four minutes to defeat him. The really competitive games are in the Agency vs. Agency modes that pit teams against one another for control over hexagon shaped pieces of land. The matches are split into zones and seasons, which I am told last about 10 days.

I found the gameplay to be pretty fun. I do not think it was as amazing relative to its genre like Tribes or Smite was, but Hi-Rez did a good job on this one nonetheless. The gameplay felt smooth and it was interesting/competitive enough to keep me playing.  It was not extremely challenging but there were a few fun quirks here and there. In some places enemy robots were spawned in behind you so you had to a keep out for that. Also, did I mention jetpacks? Firearms used up energy more than ammo but melee weapons could be used nonstop. The only really weird thing about the game was some of the key layouts such as the default crouch being shift.

I would recommend this game overall to anyone interested in the genre. The matches seemed pretty well matched and the online gameplay was never too easy to be boring or too hard to be discouraging. The game is free which of course means that you can pay real money for some stuff, but I saw no real advantage to doing so. The game can be downloaded on the website.

P.S.  I apologize for the lack of pictures/ links in the last few posts. I've been having issues opening the little GUI that allows me to do so. I was able to get it working today though so I will go back and add those if I get them time!

I believe it is called Warface. It is still in closed beta I think and you have to send your email to be considered for an invitation at the moment.

You mean <a target="_blank" rel="nofollow" href=http://www.game-debate.com/games/index.php?g_id=1359&game=Warface">Warface?

Ya that game thanks i wana try it out if i get picked for the beta.

One of my favorite games back when AvA was actually active... too much focus on the open-world PvE was what killed it.
And yeah, GA2's Beta is slated for late this year.

But... I thought this game was dead... HiRez announced they'd been working on a sequel :x

Not yet, but getting close. All of the singleplayer stuff can still be done of course, but it can be hard at times to find people online to play with.