Some games can be torturously confusing when releasing worldwide if different publishers pick it up, with different names and playerbases for every region.

That doesn't necessarily make the game bad though, and can add flavor. Lets see what OSUBoarder thought of one of these games, Ace Online, in day 153 of the 365 Days Of Gaming...

Ace Online is a 3D sci-fi MMO flight/shooter developed by MasangSoft for Microsoft Windows. The game was originally released under the name Space Cowboy Online in North America and its European counterpart goes by the name Air Rivals. To be clear, they are exactly the same game and only the name is different as they are hosted by two different corporations.

The game has players combat one another in futuristic ships or starfighters that they call gears in an ongoing battle between an imperial government and a rebel faction for control of the planet. The game takes place in many large, persistent maps ranging from terrestrial to space maps that serve as an open world style hub to complete missions. The actual central hubs are the two cities containing the two factions and it is her where you can walk around from merchant to merchant to purchase ammunition and upgrades for your gears. The game has a loose story and there are single player missions to complete that fit into this as well as the online arena where you or a group of your buddies can challenge people from around the world to take the leaderboards. By completing PvE missions you gain experience and level up which improves your abilities and skills. There can be times where monotonous grinding is needed to be able to compete with other fighters but ultimately your success comes down to your own skill in dogfighting. 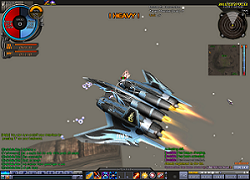 The game is relatively simple with controls that are easy to learn and a more than extensive tutorial for those that need it plus it can be skipped for those that do not. The plane is controlled mostly with the mouse with some throttle and secondary controls on the keyboard. There did not appear to be any options to change the controls to more fine-tuned control which may be a letdown for some people. Gears come equipped with a simple primary weapons such as a canon or machine gun and usually a secondary consisting of some sort of rocket or missiles. In the shops you can upgrade these items to much more devastating versions that can wipe out enemy fighters in droves. Overall the game combat was interesting enough for a little while but then it started to get a little stale and repetitive. The game is free to play but it seemed like almost every major or beneficial item in the shop needed to be bought with credits that are backed by real world currency which was a huge negative strike against this game.

The other large part of the game which I have relatively little experience with is the Nation Wars. Basically there are matches that pit the two factions together in a multitude of different scenarios such as mothership battles, raids and skirmishes that garner points for each side when a kill is executed. In this you can form brigades and work with up to 30 other players as well as becoming a leader of the group and be up for contention as president of the faction for a short period of time.

Though the combat in this game was entertaining at first, the game started to quickly lose my interest. Part of that could be that I prefer more realistic flight combat games but the game as a whole was not terribly innovative or outstanding. It was by no means bad but it just did not stand out to me. Some of you guys may enjoy this game and if you are interested you can go here to learn more and download the game.

P2Win Eh? Well if its true this I don't like it.