The Ubisoft show this year was probably one of the most anticipated of the pre-E3 conferences. As expected there weren't that many real surprises, though that doesn't mean that we were starved of new information, gameplay, and of course plenty of awesome trailers.

Watch Dogs, Assassin's Creed IV: Black Flag, and Rayman Legends made the big noise, but there were plenty more titles on show too. Even a couple of promising new IP's were showcased. More than enough reason to check out the recap...

The conference started off with some almost-badass guitar playing, that managed to stay well within the awkwardness you'd expect from a pre-E3 conference. Naturally, it was all in the name of Ubisoft's 'Rocksmith' series, with their upcoming installment, 'Rocksmith 2014'. According to Ubisoft, it's "more accessible to a broader audience. It's for anybody out there, a beginner or pro."

A competitor to Activision's Guitar Hero? I'll let you be the judge.

Next up was the new Splinter Cell, Blacklist. In this next helping, terrorists calling themselves The Engineers perform attacks on vital infrastructure and accomodations, such as military bases. These attacks are called 'Blacklists'. You (as Sam Fisher) are going in.

The game is, as always with the Splinter Cell series, action packed with some diverse gameplay, varying from hit-and-run to stealth-focused missions. Tools such as goggles, drones and other gadgets will be available as always.

Blacklist also features a 5 versus 5 mercenary multiplayer mode. Currently the game is scheduled for release August this year.

Now on to a series that has become iconic to gamers all over the world, to fans of any genre: Rayman. The new game in the series, titled 'Rayman Legends', will offer a great-looking and colorful world. You will of course be able to play as the beloved Rayman, but other characters will also be selectable.

The game world has plenty of variety in landscapes and atmospheres. Ubisoft stated that they know that they made the fans wait for a long time; this was because they wanted to be sure that Rayman Legends would be as good as they could make it. It also contains competitive multiplayer modes.

The Mighty Quest for Epic Loot

Yup, that's really the title of Ubisoft's announced new IP. As the title suggests, this game doesn't take itself too seriously. Build a castle, defend your treasure and capture that of your enemies. Defending your own loot can be done in a host of creative ways including traps. The whole concept is served with a healthy dosage of humor. 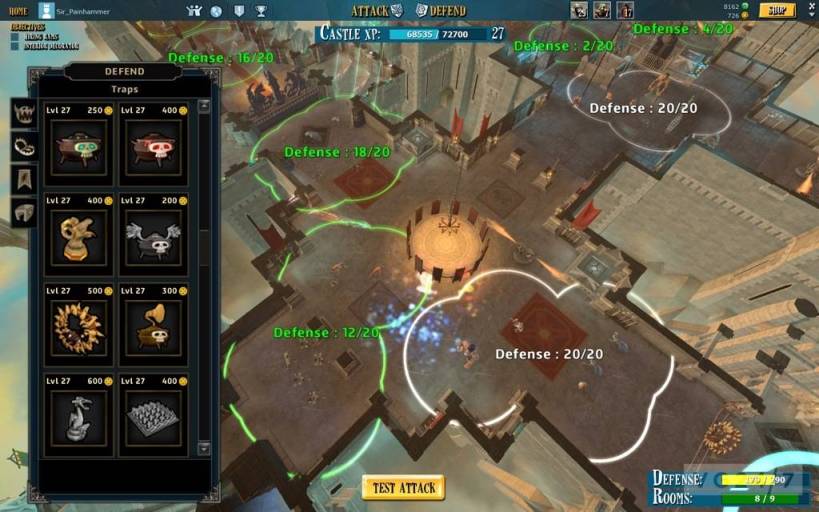 "The Mighty Quest for Epic Loot is a brand new Free-to-Play IP from Ubisoft Montreal for the PC that thrusts you in an outrageous medieval fantasy world called Opulencia where wealth, status and showboating are the name of the game!"

South Park: The Stick of Truth

South Park got some brief attention as well, and Ubi showed off a completely new trailer. South Park: The Stick of Truth was acquired from bankrupt THQ earlier this year, and will now be published by Ubisoft. On to the trailer - It showcases kung fu farts and, well... that's about all I could make out of it. Have a look for yourself:

The game will no doubt appeal to South Park fans, as it's close to an exact stylistic copy of the real episodes - although now you are in charge, of course.

South Park: The Stick of Truth will release for the current-gen consoles and PC. No word about next-gen yet, neither of a release date.

Next up is a racing game that is for the next-gen consoles. In The Crew you drive through an immense and varied world. Online play is definitely encouraged, either with or against other gamers. Form rivalries with other crews and gain territory. Complete missions and challenges, together or solo.

The Crew will have many custimisation possibilities, such as building your car up from the engine to the rims. Drive from Death Valley to Miami to Las Vegas. Have fun with 'more variety in a bigger world than ever created.'

The game is scheduled to launch early 2014. The game looks gorgeous, as you'd expect for a next-gen console release.

Of course Watch Dogs couldn't keep from barking. The trailer leaked out earlier today, nevertheless it was still amazing to see it for the second time.

Watch Dogs will be released in Q4 2013, and will appear on all consoles and PC.

To keep the conference interesting, Ubisoft busted out their moves with Just Dance next. In this latest version of the popular franchise you can dance with six people at once, to your favourite song, as chosen by you.

The game will also bring dancing to the next gen machines, and will release in October 2013.

Another happy-themed game that doesn't take itself too seriously. Rabbids Invasion evolves around (as if you couldn't guess) the loveable Rabbids. The game uses motion control camera so you can dance with your rabbits, solve puzzles with your voice, etc. You can now actively participate in your favourite scenes.

Obviously the new Assassins Creed in the series, 'Black Flag', couldn't stay absent. No spectacular new information was revealed, and we were once again notified the game will evolve around pirates. As if there was a gamer on the planet who didn't already know that! Ohh, and a new trailer was showcased:

And we are in luck, as they've showcased another one, this one with an awesome background song:

Black Flag will be released Q4 2013 on all consoles and PC.

Two Trials games have been announced, one for the next gen consoles and one for mobile devices.

At the end Ubisoft had a little surprise in store for us, in the form of a new IP called 'The Division'. Ever seen the TV show Doomsday Preppers? Well, in this game their predictions of doom actually come true, and the world's gone to hell. This chaotic world can only be saved by one team: The Division.

The game will come out on the next-gen consoles, and trust me that much is obvious from the trailer. The graphics are breathtaking, the detail showcasing is immense. Enough talking, check it out for yourself:

Not many surprises from the Ubisoft conference this year. Nevertheless, it might be one of the best so far, with breathtaking reworked classics, new IP's and more. Even the older series can still make people excited. On top of that, there is plenty of variety between the games overall.

Ubisoft have always stated that they were yearning for the next-gen consoles. Now they have showcased why.

i am interested in The Mighty Quest for Epic Loot :D

It was one of my favourite showcases as well ;)

only thing which seems promising of those is The Crew;
Assassin's Creed showed nothing of its gameplay so I expect the same thing as AC3 of that point...

You didn't say the gameplay of AC? I believe it was shown on Sony Press conference instead of Ubisoft's. I believe Watchdogs as well. I didn't see them till now but that is only because I studying physics.

You see the trailers for assassins creed and you realize what graphics, what game play and what a game :O

I don't see that actually. I don't care about COOP but the single player itself looks good with amazing graphics and gameplay.