Finally, after a fair while waiting and wondering, fans are finally getting some of their questions answered regarding Eidos Montreal's fast-approaching stealth larceny simulator, Thief.

After snooping around the Internet, listening in on conversations and pilfering rumours and facts alike, we've got a news-satchel of game-loot to share with you right up in here...

So first up, it's got to be hard bringing a well-loved franchise back into a world where fantasy and stealth games are now pretty common. There are certain elements of Thief that look much like Dishonored, others that look like Hitman: Absolution, and others that even look a little like The Witcher 2. But all of these games can claim some heritage from the old school sneak 'em up games that formed the foundation of the series. This isn't a sequel, though - Thief is a 'reboot' of the franchise, and so there are chages - including the voice actor who plays Garrett.

With that in mind, then, there is a lot that mechanically looks and feels like Hitman: Absolution. Garrett has two different ways of gauging his visibility to enemies - a lunar-themed light meter that clouds over the better you're out of the light, and a gloomy kind of frame around the outside of his vision that closes in the more concealed from view he is. On top of this, he has a focus system that allows him to see enemies and hidden objects better in much the same way as Agent 47 can with his instinct ability. Furthermore, Garrett has the ability to distract his enemies... OK, so these aren't really similarities with Hitman so much as they are the staples of the stealth genre. 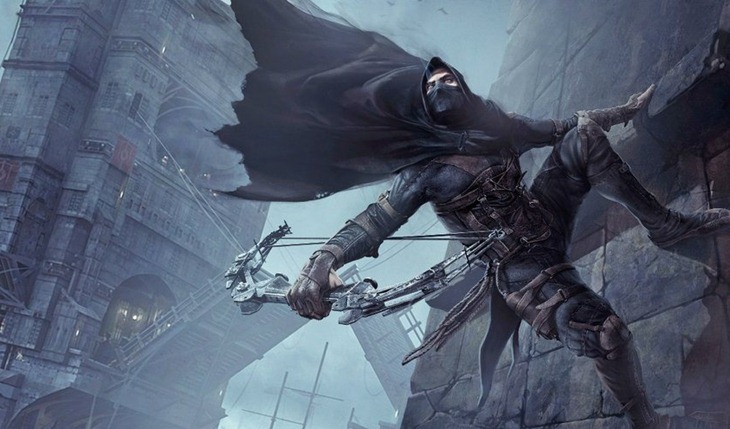 And stealthy it certainly is, because as much as the devs assure us that you can play aggressively if that's your style, anyone who has had hands on with the game tells a different tale. Enemies are tough, Garrett's weapons are not overwhelmingly useful to him and most direct confrontation either seems to end with flight or death. So perhaps not one for the berserkers.

It certainly does look very beautiful. Level design is such that you can take a number of different routes into and away from the scenes of your crimes (much like Dishonored), and there seems like loads of messing about you can do on the way, such as listening in on conversations, picking pockets, creating traps, quenching fires with water arrows (or setting them with fire arrows) or - yes, it's back - setting yourself up new avenues to explore with the famous, much-loved rope arrow.

Another way in which Thief hearkens back to the old school will be in its difficulty. Sure, there is a focus mode, but the devs are quick to explain that this is optional, and the suggestion seems to be that it's not for veterans. Furthermore, there's none of this regenerating health nonsense - once you're wounded, it's find a health restoration item, or just carry on being in pain.

I was waiting for this game for years after i enjoyed playing Thief 3.

After watching the Demo & what the dev had to say I was relieved.It seems like they didn't dump it down too much and they mentioned that even if you want to play aggresively,you'd have to do it from the shadows otherwise it won't go too well for you.The game seemed beutiful and I'm looking forward playing it.It seems like the stealth genre is making it's comeback this year with : MGS V,Thief & Splinter Cell!

ofc I'm looking forward to it;
Thief 3 was my favourite game I played a lot, in total time more than TES: Oblivion those times;
it's grandpa of stealth games, without it there wouldn't be so good Hitman, Assassin's Creed, Dishonored....

The third was my favorite as well, actually. While this may seem blasphemy to some fans, Deadly Shadows did a lot of things right; the open-world City was awesome (even though separated with loading screens), the level and mission design was phenomenal (the Cradle mission, for example) and it looked beautiful even by today's standards. I hated the climbing gloves, though, and at times corridors and streets did seem a bit too narrow, but still, Deadly Shadows is certainly not the black sheep of the three as some from the community would have you believe.

...and to this day the Shalebridge Cradle still scares the living fudge out of me... Thank you for reminding me this, it's not like I was planning on sleeping..this week.

Hehe. The Cradle was ... memorable, indeed. When I first played the Dark Project I though the undead were the scariest thing ever; boy, was I wrong :D. 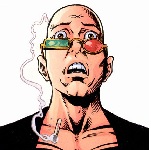 I just played through Thief 2. Playing 3 right now and I hope they don't change too much, but I do hope the AI is the best in any game.... EVER. I hope they don't allow me to kill everyone in the game just by sneaking around. Adaptive AI that is aware of their surroundings and their peers with smart positioning should force me to not be able to kill everyone without getting detected. In fact, and I may get some slack for this, but I hope it is similar to metro 2033, but with much better ai. I want stealth to be hard as nails.
Oh yea, GO SPURS!

Awesome article! I havent played Thief before but now I want to!
(Isn't it messing around btw?)

God damn it, I'm so hyped for this!