Most people have a leaning towards a preferred platform, the reason for this is often not something one can easily define in a few choice words. But we can examine relevant data to help us understand the ebbs and flow in the industry.

To summarise - People like gaming and buy lots of games from shops in the UK. If you would like a more in depth report then step this way and help us explore the subtleties of preferred platform gaming and the huge national spend that goes along with it...

First up lets take a look at the Total UK Retail Game Sales Chart for the 2013 months so far. Note that the graph is made up from data that is retail only - we'll return to the implications of this a little later.

Now here we find the number of games sold and the total revenue for each platform: 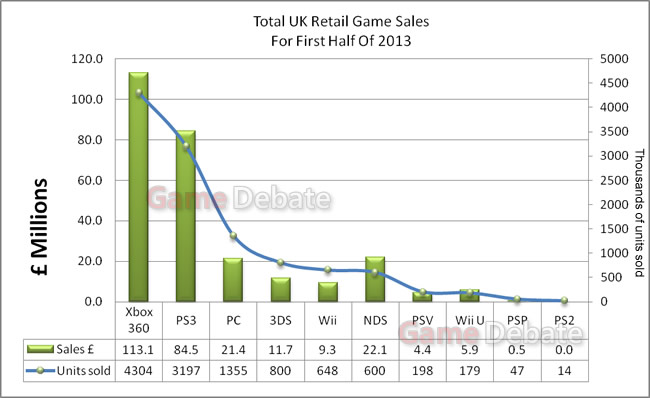 Lets start by looking at the elephant in the room - the Xbox 360 is huge. Selling over 4 million games in the UK in just 6 months, and netting revenues over £100 Million, it's quite clear that the Xbox is still in the lead. The Playstation 3 is trailing behind, but with large sales of games like The Last Of Us, it continues to compete strongly.

What is surprising on the surface is that the PC seems so much lower than the 2 major consoles. This is of course where the Retail side, mentioned earlier, becomes relevant.

PC digital download sales have been increasing steadily over the past few years and is rapidly becoming the go-to medium for major titles, especially in countries like the UK. Events like the Steam Sale and all manner of online sites (and websites for real world stores) selling digital copies of games, means the PC actually sits very strongly. If you walk into a retail store in the UK at the moment you will be lucky to see more than a handful of PC titles on the shelves, most of which are budget releases.

Sony had a great press run over the past few months, considering some of the bungles the Xbox announcement encountered, but when the time comes will this actually translate into an exodus, where gamers move from the Xbox to the Playstation 4? We have to bare in mind that huge numbers of US gamers have grown up on the XBox where it is still king. Knowing that your favourite game franchises are not available on one platform over another may also halt gamers before they jump ship and we have already seen a large number of exclusive titles announced, to remind us of this fact. 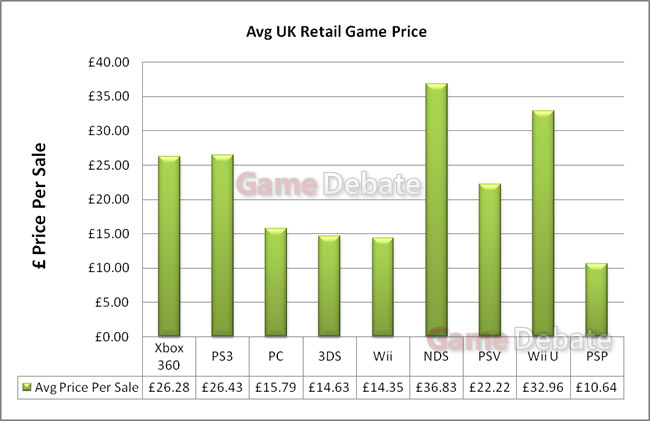 We can see that the average cost per pc title was a lot lower than you may expect given the number of sales. This may be bad for salesmen, but it's great for PC gamers, suggesting that they pay a lot less on average for games than Console buyers do. This difference is going to be enhanced due to PC being so alluring to the lower cost indie titles that often turn up on PC. As we know the PC is a much easier platform for budding new developers to get in to.

Another interesting part of the graph is seeing that the Wii, even now, is outselling the Wii U. This doesn't bode well for Nintendo, but with their signature big hitter games, like Mario Kart, Smash Brothers, Zelda, coming out later this year and early next year, that trend could well switch.

Finally, to state the obvious, the PSP is not doing well; both the Nintendo DS and 3DS are vastly outselling the mobile platform, but we could see a surge in sales if the game-streaming for the PS4 works well.

What do you think, is the PC out-selling the consoles once you add digital in, or is the Xbox too big? Do you think console titles are too expensive on average, or are you happy to pay for them? Tell us below!

Actually the famous line goes "No, I am your father" ;)

I think these numbers will drastically change in the PC's favor once the next gen consoles come out :)

Agree... In Bangalore, every gamer worth his/her salt is getting an upper middle class or high end PC... 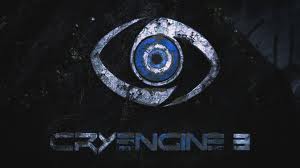 I just buy digital copy cause it's cheaper.

Yeah me too but I'd prefer retail since I collect game boxes :)

See what this looks like next year when the next gen consoles charge alot more for games and they are more affordable on PC, Wii U and NDS

I don't know anyone who actually buys physical retail games for PC, everyone downloads them from Steam, Origin or somewhere else.

I do. There's something nostalgic about having retail boxes nicely stored under your TV.

And Me. I just prefer it, especially huge games. So much easier installing off the disk then waiting 3 hours for it to download.

You two are part of the demographic that make up the charts in this article then. I was just saying I don't know anyone that buys physical PC games from retail stores.

Not everyone has the best internet connections to download digital copies, so people (including me) try to get physical copies :D

I also buy physical copies of games. It takes forever to download games with basic DSL, and I can't afford the really fast connections.

i have 63 MB broadband so i download never have disks

The thing is see sometimes is that in retail they are doing deals like 3 for £15 or 2 for £25 stuff like that. Sometimes its cheaper than downloading, expecially if its games you've missed out on in the past.

I work in Game retail shop. Yeah i believe that console games prices are too costly compared to pc.