OSUBoarder's mammoth tasking of playing and writing about a new game every day of the year continues apace. The astounding achievement has entered its 292nd day, and the finish line is nearly in sight. This week OSUBoarder takes a look at the free to play Wizardry Online MMORPG from Sony Online entertainment....

Felix: You can visit OSUBoarder's full collection of 365 Days of Gaming Blogs here, if you would like to check out his other awesome coverage over the entirety of the year. 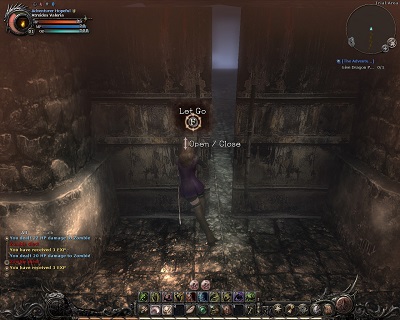 Wizardry Online is a free to play MMORPG that was produced by Gamepot Inc. Originally the game was only available in Japan, but in 2012 Sony Online Entertainment decided to take the game and put it out into the world through a closed beta.

In its core elements, Wizardry Online is similar in its mechanics to most other MMORPGs. Due to this I will spend less time going over the general features that are common to the genre. When you boot the game up for the first time you are asked to create a character from one of four races: humans, elves, dwarves, and gnomes. After you pick a race you can choose a class from a fairly standard set, including fighters, mages, priests, etc. Each race is better suited to different classes with the humans typically not being hugely outstanding in any one role. On each “soul” (game account) you can have up to three different characters created concurrently.

The core gameplay of Wizardry Online consists of dungeon crawling, whereby you are sent into a dungeon to complete a quest - usually killing a foul critter or looting untold wealth. As you make your way through the twisting and maze-like tunnels you will run into a combination of small and common enemies such as zombies, all the way up to mini-bosses in the form of large demons. Combat in this game is a little more complex than most MMORPGs in the sense that it involves managing four different bars and levels. The two most obvious are your health and mana points.  Health is how much damage you can take whereas mana is your ability to use special abilities like magic. Health and mana are not replenished over time and must be restored by either using items or being healed by a magic user. There is also another bar that acts as your stamina, depleting when performing actions such as sprinting, diving or dodging. Unlike health, this bar actually replenishes, though at what seems to be a snail's pace. As if that wasn't enough to contend with, items that you use in combat lose durability over time, and it is very possible that you can lose your sword in the middle of a frenetic battle. 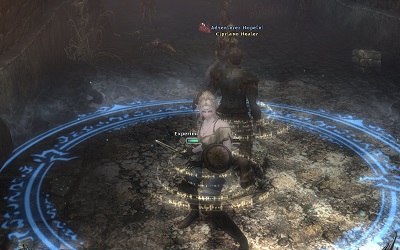 If you want to add even more fun to the mix, the game features a permadeath mechanic for the sadists at heart. That’s right; even after making it past the challenging combat and enemies, there's still every chance that you could lose your character. Permanently.

Despite this, the game is actually somewhat forgiving. When you die you enter a sort of ghost mode, where you have the chance to find and revive your body. When you get there you have a chance of reviving the body, which increases if you wager your hard-fought gear against it. So while you can save yourself from permadeath, the threat is still very much real. When you consider the fact that even items like chests can be booby-trapped, it suddenly becomes very harrowing when you are entering these dark and dusty caverns. I personally really liked this feature. because you're constantly on edge and it really helps to add a layer of caution when it comes to exploring. At the same time, the game is not too brutal that it will discourage new players from taking a crack at it. In my opinion, this game does a good job at handling the admittedly challenging permadeath system.

Looking past the permadeath system, the next biggest feature is undoubtedly the free reign of PvP combat. Once you reach a certain level, any player can come up to you at any time and start giving you what for. Most RPGs will not allow you to do this in “safe” or neutral zones, but the developers here have been having none of that nonsense. If you are killed, the player has the chance to loot their body, while you try to make your way back to it in the spirit world. There is a catch, however, that will dissuade players from going on massive murderous rampages. As you kill more and more players in random situations, you can be branded as a criminal. As such, you are more susceptible to other player attacks, as well as attacks by guards and even NPCs in the various towns that you walk through. Players can also put bounties out on other player’s heads if they are continually attacked by the same player. So while it may be fun or even advantageous to attack other players unprovoked, be sure to know that it has some heavy repercussions should you do it more often. I love this because it gives you free reign to do whatever you want but, just like in real life, there will be consequences to pay should you stray too far down the wrong path.

In the time that I was able to play this game, I have only been able to scratch the surface of not only a complex genre, but a complex game in its own right. This should in no means be taken as an all-encompassing review, but rather a first a quick look and first impressions. This game may not be for the faint of heart, but the more adventurous gamers out there will enjoy the challenge. If you want to learn more, you can find the game and associated media here.

If you want an idea of how hardcore this game can really be, check out the launch trailer below:

I hope it is good cause all these trailers come out so epic but when you play it... after a few levels uninstalled

I played that on too, but compared to skyrim it's a bit too difficult imo (no health and mana regen), combats are dumb, and disconnections are really frustrating :/

anyway I recommend this game to anyone who wants to play something interesting and not sanbox-easy,
even the graphics look rather good considering it's an online game :)

can an online game be so good. Saw the trailer seems good, Hope it will work on my rig :D

Trailers are always so epic and grand but when you finally test the game, the combat is like 'swoosh' and 'bang' :D :D