FIFA 14 has been out for well over a month now, surely a good amount of time to judge whether EA's decisions have paid off or not, so let's get to it! Let me start off by saying that FIFA 14, as always, is like a drug; it's hugely addictive and desperately maddening in equal measures.

As with any football game sometimes it can take weeks or even months for the games mechanics to really stand out or for problems to repeatedly crop up, so here we take a moment to look at FIFA 14...

In this belated look back at FIFA 14 we'll be debating whether the changes that came to the title have paid off, as well as how and why the game plays as it does. If you're looking for a review, or an article to find the actual systemic changes, be sure to check out Jon's review!

When FIFA 14 launched back in September, one thing was immediately noticeable - the game was slowed downed heavily. This made for a more realistic footballing experience, requiring you to play with a lot more tactical nous rather than memorising reams of skill-moves.  Passing, thinking ahead, managing positions; just some of the realistic factors that were added by this one simple adjustment. To this day, I believe this move has been a great one for shaking up the play.

Another effect of this shift is the issue of scoring goals; which is a lot harder than it has been with it's predecessors. You really do have to work hard to get a goal, passing and manoeuvring in order to find that slither of space to snake the killer pass through.

The game tends to force the player to make silly mistakes. It's hard to keep possession consistently, so mistakes are easily made. That being said, you may be hands down the better player all game, but one single mistake can cost you dearly. This is surely implemented to tread on the toes of realism, but it can be frustrating to concede a late goal so needlessly.

Add to that the fact that the ball appears to be a literal hot potato; Joe Hart-esque blunders and dropped balls can be seen with alarming consistency. Keepers always tend to let the ball rebound, providing your opponent an easy second, third and if need be; a fourth chance. Not only is the keeper clunky at times, your defenders love to tangle up when they both pursue an attacker, giving your opponent a free passage. All in all though the enhanced player physics add some real rough and tumble to the game which adds some additional dynamics to aerial play, particularly in and around the box. 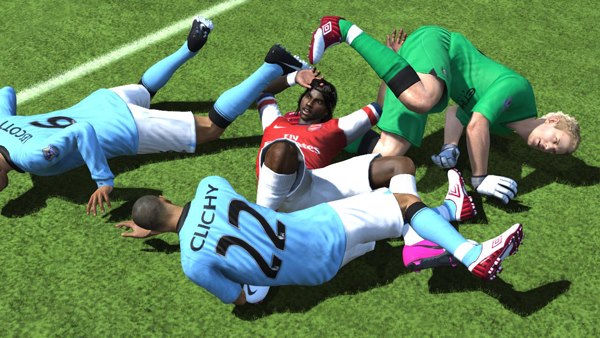 The headers in FIFA 14 have received a significant boost (that's actually an understatement). A patch has been implemented that decreases the effectiveness thankfully, but more often than not the attacking player has a head forehead like a Tommy Gun, blasting them goalwards. Yes, it's an annoying, cheap and easy way to score, and it definitely hampers enjoyment when you're on the receiving end of it.

At launch, there was yet another flaw; finesse shots had a ~70% success rate of scoring a goal. This has been fixed however, as that was significantly affecting the the balance of the game, as players could ping it shots left, right, and centre, expecting results.

These flaws are frustrating to say the least; the better player does not have the highest chance of winning in many occasions. I say chance, as of course anything is possible in the beautiful game.

After over a month month, I expected EA to have fixed many of the multitude of problems, but with some aspects this doesn't seem to be the case. Patches are often criticized, but they're okay with me, as long as they improve the game. I would rather have a company patch a bad game into a good game than have them neglecting their fan-base and thus the game altogether.

I wouldn't advice you to go out and buy FIFA 14 immediately, if you currently own its predecessor. FIFA 14 is a great game to hitch on, as its learning curve is less steep, the veterans are struggling and skill differences are slimmer. If you do own its predecessor and would like to get FIFA 14, you'll be smart to pick up the next-gen version if you plan on picking up either an Xbox One or Playstation 4.

What on Earth is happening on the second picture? :D :D

Exactly what I'm trying to say ^^

Will all these improvements be present on PC version
??

Perhaps in Fifa 15, but not in this year's version. (The current-gen consoles and PC versions do not come with the 'new ignite engine'.

Damn man looks like i will have to wait for fifa15 then..